For most of my life I’ve felt alone and lonely. I never realised this was a thing, it’s just how I’ve always felt and I never really questioned why.

Now I’m older, I understand why we need to talk about it. I remember reading this research that said loneliness is as bad as smoking for our wellbeing. Loneliness matters and it affects everyone at some point but is more likely to affect certain people like those of us living with chronic health illnesses, older people and the bereaved.

I grew up in a large extended family but I vividly remember most of the time feeling isolated by derealisation and depersonalisation. If you don’t what these are, I didn’t either for a long time; they’re the feelings of not really being here, like I wasn’t real and the world around me wasn’t real. Like I’ve been stuck in a blurry dream.

At school I never quite fit in, and I always only ever had a few friends.

There were, however, a few things that felt real in my life. 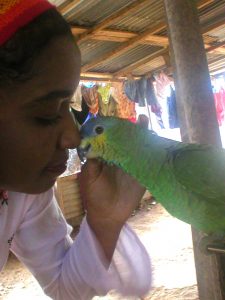 My Amazonian parrots Stevie and Cocot. Stevie, a huge yellow-headed mature parrot my uncle caught while hunting when I was around 4, was my first friend. I hated seeing him in a cage and I remember the first night he came home, this wild bird let me scratch his head. I thought that we were not so different. And Cocot, a small needy blue-headed Amazon, my second friend, who behaved like a baby, only with feathers. They both showed me so much love and once I remember I went to spend time at my Aunty Enid’s house over the school summer holidays and I had to return home early because my birds weren’t up for eating or drinking in my absence and their feathers were turning a pale grey. I was as attached to them as they were to me.

I lost Stevie when I was aged 11, and Cocot went missing after a stray cat entered our yard and he flew into the trees. He called for weeks while we searched for him, but we never found him. I was 19. The grief of losing my birds was and still is one of the hardest things I’ve had to deal with. It sharpens my loneliness.

When I left Trinidad, my loneliness took a different form. It wasn’t worse but this time I didn’t have people around me I knew. I’ve lived in two different countries since and battled ongoing health problems, but finally started getting diagnoses and exploring treatment for fibromyalgia, depression, anxiety, complex post traumatic stress disorder and borderline personality disorder. Simultaneously I was also dealing with the struggles of being an immigrant abroad with little money, discrimination constantly raring its head, at one point facing homelessness and being bullied and isolated.

What kept me going was my Ma and Grampie – my grandparents had raised me from small and left an indelible mark on my life. Even far away, their impressions on me stayed and influenced.

My grandparents and I were going through the same thing

What helped with loneliness was joining an online mental health forum in London where I started meeting people going through similar things, and starting my blog The Invisible F which led to me meeting many bloggers around the world also in similar positions. It didn’t eliminate my loneliness but it did make it more bearable. And I realised I wasn’t alone.

We called it grief and maybe it was/is that, but it’s also been loneliness, aloneness, and longing. My grandparents and I were going through the same thing. Click To Tweet

Many years later my worst nightmare came to pass: my Ma passed away before I could see her. That was 2020. Our relationship had blossomed over the distance and weirdly my conservative Indian Ma had become more open with me than she had ever been. She often cried when I telephoned, and once, while talking to her on the phone, she said to me that ‘sometimes a kinda grief just does come over me and take me.’ Before I could process that, in the background my Grampie said loudly, ‘Dat does happen to you too?’ I cried. I knew that ‘grief’ they were talking about. We called it grief and maybe it was/is that, but it’s also been loneliness, aloneness, and longing. My grandparents and I were going through the same thing.

When I am lonely now I think of my grandparents. My Grampie is 99 years old, and reminded me recently, that if he sees January 2023 he’ll be 100! I think of my Ma and my parrots everyday. I regularly dream of them and I know they’re with me. I try to cope with my loneliness by cooking mindfully, sharing stories, going out with friends when I can and remembering that I am not alone in this experience.