I wasn’t sure what to expect when I agreed to try a floatation tank for the first time. Without knowing much about it, just seeing the tank with the soothing blue lighting gave me the feeling that the future was here and I was stepping into a science fiction novel.

What the big deal anyway?

I’d heard that floatation therapy using sensory deprivation tanks are great for both body and mind, reportedly helping to improve sleep, reduce physical and mental stress, and release endorphins (those happy chemicals). They offer a closed environment where our senses get to rest because there’s low sensory stimulation (low lights, no noise etcetera).

A big attraction for me was the half tonne of Epsom salts in the water (a great, proven remedy for fibromyalgia pain thanks to its high magnesium content). This is one of my go-to remedies for managing pain so I knew I would benefit in some way and was keen to try it in a space bigger than my bath tub. The thing that really stuck with me though was my friend saying the experience gives her mind a “reset.” It was music to my ears because smack in the middle of a bad fibromyalgia flare, that was like a fibromyalgia cure being dangled before my googly eyes. So, I did it!

A big attraction for me was the half tonne of Epsom salts in the water (a great, proven remedy for fibromyalgia pain thanks to its high magnesium content). Click To Tweet

I was a bit reluctant and anxious about getting into an enclosed space but I read up on it beforehand, had a chat with my friend and the staff when I arrived at Floatworks and was reassured. Turned out the tank was a lot bigger than I expected and I wasn’t required to close the lid or take the lights off. And if there were any worries there was a button I could press to call for help.

After a brief introduction/tour I had a quick shower and stepped into the pod. The main lights in the room went off after I settled in but I kept the lights on in the tank, and the lid open.

I can’t swim so I had initially worried about lying in a tank of water but it was only 12 inches of warm water, and the quantity of salt in the water meant that I floated easily. I opted to use the foam head rest and that was extra comforting. There was complete silence (even with the lid open) but I could have asked for music if I wanted.

I tried to relax and spread may arms and legs out, I floated back and forth, left to right in the pod and tried to embrace this weightless feeling.

Once I settled into a comfortable position, my anxiety came straight into the pod with me (don’t let that smile in my photo fool you). It started with visions of human trafficking. What if a stranger walked into the room? What if I was assaulted? What if they forgot me in there and went home? what if I woke up in a different space? What if I was drugged? What if, what if….

I did have a slight worry that given my history of complex trauma and hallucinations I might struggle to relax, but I didn’t think it would be that bad. Just before I was about to spiral into a full blown anxiety attack that made me consider exiting the pod, I managed to calm myself by working through the logic aloud, in between deep breaths.

I didn’t like that the door was behind my head (bad Feng Shui peeps), but I floated slightly to the left so I could see the door in my side vision. I reminded myself that my friend was in a room just down the corridor, and she had done this multiple times and assured me it was safe. I told myself ‘I am safe, I am safe, I am safe’ in between breaths. I eventually managed to calm myself down enough to relax to the point where I started to fall asleep and purposely tried to stay awake.

At times my body felt tired, like when you lie in one position for too long so I shifted about slightly, sometimes crossing my legs, bringing my arms over my head, or folded on my tummy, sometimes I bent my knees, then spread them back out. 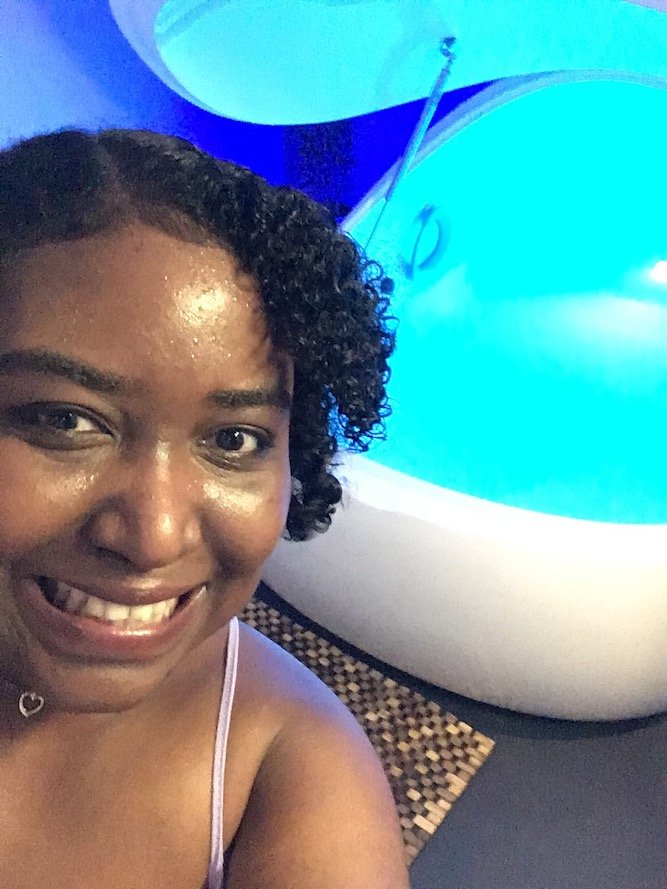 Time feels like it passes differently in a floatation tank. I had taken my watch off and kept wondering how long it had been because I felt like I had been in there for ages. Eventually I relaxed and stopped asking myself the time. When the hour had nearly passed, the lights gently came on with music alerting me that I had ten minutes left.

My first reaction post float? I survived! Second thought ‘Im going to sleep well tonight!’ (And I did).

I had a post float shower, changed and went to meet my friend in the lounge where we drank tea and reviewed our experiences. It was interesting sharing with her because sometimes when you live in your own head you forget that other people might share similar experiences as you. Turns out my friend was able to relate and empathise with my experience.

I left feeling rather relaxed, like I could sleep for three days. It wasn’t dissimilar to that refreshing feeling one gets after a day on the beach with lots of time in the sea.

It’s a great one hour experience for both body and mind, and can be even better with a few improvements.

The only thing that would have made my experience better as someone living with anxiety and C-PTSD was perhaps being allowed someone I trusted in the room, to watch me while I floated so I could fully relax. This could be remedied with a little tweaking if they wanted to cater to a bigger audience dealing with severe anxiety and trauma. Also, maybe reposition the pod so the door is in sight. I will definitely try it again, as I imagine over time the experience would be even better when I get past those initial anxieties.

All in all, a great experience that I’d recommend, even if as an occasional treat. At £55 per float the cost may be a deterrent for many (I certainly wouldn’t have been able to try it without the opportunity kindly offered by my friend.) There are packages on offer but perhaps in future the NHS might prescribe subsidised floatation tank sessions for people living with chronic pain conditions like fibromyalgia and those in need of de-stressing.

And that big £55 question – did it give me a ‘reset’? In a way it did! I’m actually looking forward to the next time. It’s a great one hour experience for both body and mind, and can be even better with a few improvements.