*This post has been updated to include training links*

You know that feature on Facebook where it brings up memories from previous years?

I took one look at it and remembered.

How deceiving appearances can be.

Only a month before this photo I had been lying in hospital after a near-fatal suicide attempt. At the time I couldn’t talk about it openly; not really, with anyone I knew. I thought that no one would understand. I was afraid, and in so much pain that I didn’t want to be here in this world.

So five months later, I tried again, and harder.

It was much, much worse than the previous attempt, and I was placed on suicide watch once I came out of Resus and the High Dependency Unit.

Six years sometimes feels like another lifetime, but always, I remember it like it was yesterday. The pain is still fresh, and I still struggle frequently with suicide ideation – not feeling like I belong here, like this world is not my home, with a depth of emptiness that feels all consuming, at times.

But much has changed in six years too. It’s been very gradual, but I went to therapy and started sharing my experiences – this was important to help me process some of the traumas I’ve suffered. I started blogging openly about my mental health, and I met other people – through charities and online who struggled similarly.

It’s not easy to talk about but it’s gotten easier for me. Yes it makes people uncomfortable. You might not know how to respond, but it’s so important and it can save a life.

Tuesday 10 September is World Suicide Prevention Day, and the theme is fitting – Working together to prevent suicide.

I talk about it, openly, and I will always. Sometimes, it is to encourage someone else who is struggling, or sometimes someone raises it with me when they think I’m struggling. I sometimes talk about it with my caring GP, with select friends, co-workers, sometimes Uber-drivers, on my blog, and yes, even on social media where I’ve found a most supportive community on Twitter.

Talking about it can bring hope

For a long time I was ashamed to tell anyone that I struggle almost daily with not wanting to be here. And then I met so many people who said they felt exactly the same! And in my darkest moments, support from all these quarters have helped me to keep on going through the night. I’d tell myself, ‘one more day, just give it until tomorrow,’ and then a new day would always comes. It’s still a fight but the new day brings hope. And the community around me, reminds of me of that.

It pains me when I hear grieving families say ‘if only I was brave enough to bring up suicide, or talk to my son or daughter about how they were feeling, they might still be here.’

This is a global crisis, and everyone – I mean EVERYONE, should know how to have a conversation about it.

The thing that really strikes me about this photo of me, is I can smile genuinely, even when in the throes of my darkest hours. And from experience, I think that sometimes people can misinterpret outward appearances, because we still as a society have stereotypes of what we think depressed and suicidal look like.

In this photo of my my dress is covering the raw scars on my thigh from self-harming. But you can’t see that. And you can’t see the turmoil that was raging within. So it’s important to know what signs to look for in someone who may be suicidal. They might be acting out of character, they might be fidgety, looking upset, stressed or using language like ‘everyone would be better without me.’

But the best way to find out about how they’re feeling is to ask.

Suicide is preventable and we all have a part to play.

Talking about it isn’t going to make it more likely to happen.

Have an open mind. 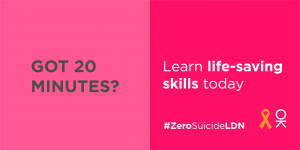 There are lots of resources online to help guide you on how to have a conversation with someone who is suicidal, including from Mind, and Beyond Blue.

There’s also free, useful 20 minute training from Zero Suicide Alliance which anyone can do. You can do the training here.

If you’re feeling suicidal please reach out to someone too. I’ve benefitted a great deal from speaking with the Samaritans.

On WSPD at 8pm I will light a candle for my cousin Emmanuel. You can also remember loved ones you lost to suicide and show support for prevention by lighting a candle near a window. You can download the postcard here (available in 63 languages) to invite your friends to join in too.

If you are in the US, UK or Canada you can call the phone numbers below if you need support. If you’re thinking of hurting yourself please call your local emergency numbers.

The suicide risk in fibromyalgia