When chronic illness turned Melissa Reynolds’ life upside-down she decided to fight. Nevermind her doctors wouldn’t help, she’d do whatever it took to get her life back.

10 years ago, a then 22 year old Melissa Reynolds was living in Wellington, New Zealand and not having the time of her life.

Her problem was pain, and plenty of it. She’d been suffering since she was 14 years but doctors dismissed it as tendonitis.

“At 17 I had severe shoulder pain. I was sent to specialists who basically made me feel like they thought I was making it up because the pain changed in intensity and occurrence. At 21 I got sick with a severe bug in my last semester of university. It took antibiotics and a few weeks to get better but the fatigue stayed. As I started my first full time job the severe neck and back pain started,” says Melissa.

She finally got a diagnosis, after her friend sent her an article on fibromyalgia in the UK.

“I took that to my GP and she kind of said, ‘sure it’s fibromyalgia,’ after checking my tender points. At that point they did nothing to help me,” says Melissa.

Things were looking bleak. Melissa’s health continued to deteriorate but she never stopped looking for a way up.

“When I was at my worst, I had this vague sense that if I could work slightly less, then I’d feel a little better. My parents invited me to move with them to a warmer climate where I was able to reduce my hours to 27.5 hours per week in the non profit sector, and cut the one hour bus ride each way. With the slight reduction in pain and fatigue I was able to slowly dig myself out through research and personal trial and error. I just needed a little gap through the fog.”

This slight improvement had major roll-on effects for Melissa’s life.

“Once I had a reduction in symptoms from that I was able to really start researching and enacting things. It’s taken several years and a heap of trial and error and at this point I’d say I experience pain levels of 3 to 5 (out of10) on average and fatigue levels of about 3 to 6 on average. I do need to meditate for 20 to 30 minutes to get through the day. I have to do a lot of coping mechanisms to get through but I’m pretty happy with my functionality versus quality of life.”

“Even with these improvements, Melissa’s biggest challenge is “doing life at proximity to normal.”

“I look and sound normal but have much higher pain and fatigue levels than normal people! I do my best to enact all of the self-care mechanisms I have compiled over the last several years of actively fighting chronic illness,” she said. 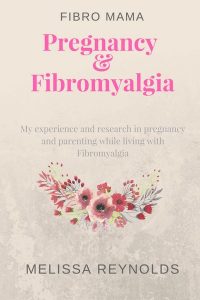 But Melissa knows that little victories matter. Small improvements in her health went a long way.

Fast forward to the present. Melissa is living in Auckland, New Zealand with her husband and two children, and the future is looking brighter than ever.

Last November she published her first book, Fibro Mama Pregnancy and Fibromyalgia, on her journeys through two pregnancies with fibromyalgia. Her second book, Melissa vs Fibromyalgia: My Journey in Fighting Fibromyalgia, CFS and Myofascial Pain Syndrome has just been released later.

And while she is proud of her books, she says her children are her biggest achievements.

“Producing two babies is no small feat with chronic pain and fatigue. For me pregnancy symptoms were like supercharged fibromyalgia,” she says.

Drawing inspiration from her boys, her faith and other people battling chronic illness, Melissa says she won’t stop fighting for the life she deserves. Click To Tweet

“Aside from my second book and raising my children, I hope I get to a point where pain and fatigue don’t need consistent management. Now that I am starting to feel a little better and the children are getting a little older (nearly four and one) we are thinking about travel – first to Hawaii and then to India (where my husband is from). Travel is a big deal for me as flying is hard for me, changing time zones for someone with chronic insomnia is serious, being subjected to other beds and pillows is a big struggle for one with chronic neck pain and heat and humidity are super hard for me to handle. But I finally am in a place where I feel like it’s possible.”

And if Melissa’s learnt anything from her experiences, it is that anything is possible.

Melissa Reynolds
Melissa Reynolds
Home: Auckland, New Zealand
Diagnoses: Fibromyalgia, Chronic Fatigue Syndrome and Myofacial Pain Syndrome (it was a tough battle just to get diagnosed with fibromyalgia)
Blog: www.melissavsfibromyalgia.com
Facebook: https://www.facebook.com/confessionsofafibromama
Twitter: https://twitter.com/thefibromama
Hobbies: I read voraciously and writing (I write almost as much as I read)
Words I live by: We deserve a good quality of life. We deserve to enact coping mechanisms that reduce pain and fatigue. But we have to fight for it. This is something I am still learning and will work to enact for the rest of my life.

6 Replies to “Overcomers (Melissa Reynolds): ‘How two keys decisions turned my life around’”