I have been trying for the better part of the last year and a half to get back into my old blogging habits. I’ve been stymied by a nagging bout of depression that won’t let up.

But I feel upset. Angry, sad, depressed (of course) confused and lost all at once.

I’ve been trying to think of blog posts and I realised everytime I wanted to write about something, it was a snippet of a possible post rather than something I might talk about in a full length post. A number of things happened and I wanted to talk about them, some of them small, some of them big, but equally, my unwelcomed companion BPD rings it on in my head until I’m so annoyed. So I decided to start this series of ‘What was that’ posts to highlight the myriad of goings on. Some of these I hope to expound on later on. If the bloomin’ black dog takes a nap and gives me a break.

I had been relating to a colleague about how difficult it was when I attended an event and because the lift was broken I had to walk up four flights of stairs. It knocked the wind out of me. I conveyed this to the venue staff member walking with me because I know fibromyalgia is invisible. I was out of breath but she might have thought I was just unfit.

My colleague replied, “Imagine if it was someone with a disability.”

Me: “Well fibromyalgia is actually a disability.”

Colleague: “No I mean, like an actual disability,” she emphasised with poppin eyes and hand gestures.

Seriously? What was that?

Depression aside, I’ve been very poorly. Several weeks ago my gastritis flared. Since childhood this has been a real problem that not even medicine would ease, and my grandmum would wake up to find me curled in a ball in the living room. She’d offer to take me to hospital and when I declined she’d make me garlic tea which tasted awful but worked. I had a bout of that for about five days and couldn’t eat anything or lie down. I felt crappy and alone, and wept for my Ma. I had to go to my GP before work to get my meds changed. A week later I was reeling from fibromyalgia related pain in my neck and back. I struggled to get to work. It was the kind that’s bad enough that I had to crawl out of bed on all fours. Two weeks later I still couldn’t lie down because I was coughing terribly and wheezing. That was day after constant throwing up. I felt like I was dying. Went to hospital and got antibiotics for chest and ear infections. This week my tummy hurt so bad (the IBS is another story) I had to call to speed up my gyaeno appointment which should happen after my next colposcopy and biopsy (they’re investigating). I’m so bloody exhausted of feeling so unwell. This, despite my ongoing attempts at being healthy (juicing raw fruit and vege), vitamins, probiotics, mindfulness etcetera etcetera. I know it could be alot worse and I remember my hazy twenties well when my fibromyalgia got so bad I needed a walking stick. So I’m thankful, it’s just hard to carry on when one thing after the other goes wrong.

No empathetic response begins with ‘at least…’

If you’ve read my blog you might gather that I’m big on empathy.

Empathy asks a lot of us, I know. I love how Professor Brene Brown explains it – she says it is a vulnerable choice, because in order for us to empathise with someone we have to identify something in ourselves that feels the same way they’re feeling.

I was telling someone via text that I’m so fed up of being ill all the time. She answered, “at least it’s not the same illness.”

Thanks, I feel better. 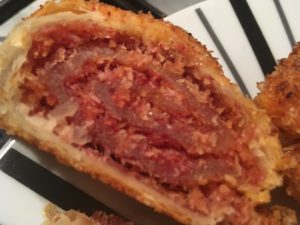 In other news I’ve been cooking and baking alot more as a therapy for depression and anxiety. It’s really hard to think of how crappy I’m feeling when I’m focused on getting my food right. Something good to celebrate. Today I made coconut rolls – when I was a young child, a bakery van used to pass through my neighbourhood and my Ma would always get me whatever I wanted. These were a favourite. It tastes like home.

How have you been?

2 Replies to “What was that? – the first in a series of ‘what the crap is going on’ posts”