As I stepped off the bus, with little warning, a storm of hail rained down on me.  It was sudden and heavy, like someone had accidently spilled a celestial handful out of the heavens.

The hail crystals pelted on me and thankfully, there was a sheltered bus stop in the near distance.

The day before, I’d gotten wet in the rain.

The end result of the two episodes was a sore throat that crept up on me with annoying itchiness, followed by fever chills, and added exhaustion as the flu set in.

Now, normally when people ask me to describe the general feeling of having fibromyalgia, I always liken it to the miserable feeling one gets with the flu – like a vacuum has sucked out one’s energy rendering one exhausted, with the added burden of muscle and nerve pain, and a slew of other symptoms. 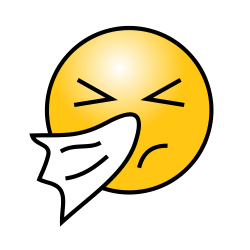 So, what happens when a fibromyalgia sufferer actually gets the flu?

Well, let me tell you, I do not know what to do with myself. I don’t know if to sit, stand, roll on the floor, layer on clothes or take them all off… I don’t know…

You might be able to tell, this double whammy has left me feeling like a miserable child.

I hate to add any more medication to my daily intake for fm so here’s what I normally do with the onset of the flu.

I mixed some honey with lime, and I have a teaspoon as often as I can, usually one in the morning, lunchtime and night. If like me you have acid reflux, taking too much can be problematic, so keep in mind.

The combination of honey and lime is a great remedy my family has been using since I was a child. Honey has antibacterial properties that will kill bacteria and fight infection. It also has bits of vitamins and minerals like riboflavin, calcium, iron, magnesium, potassium, zinc and phosphorus.

Among other things, limes are packed with vitamin C and helps with the added run down feeling that the flu inflicts.

As often as I can, I gargle with some warm salted water, and I’m getting as much rest as possible.

I’m trying to avoid it, but as part of my flu remedy, I’d usually grate some pieces of fresh ginger, and bring to boil in a pan of water. I let it simmer and then I have myself some strong cups of ginger tea (I add some sugar and milk to help the taste). Ginger’s antibacterial properties make it an effective home remedy for the flu.

If you’re coming down with the dreaded flu, try all of the above –  it’s effective and all natural.

Until next time, stay warm and watch out for the rain and hail showers!

4 Replies to “Battling the Flu with Fibromyalgia”